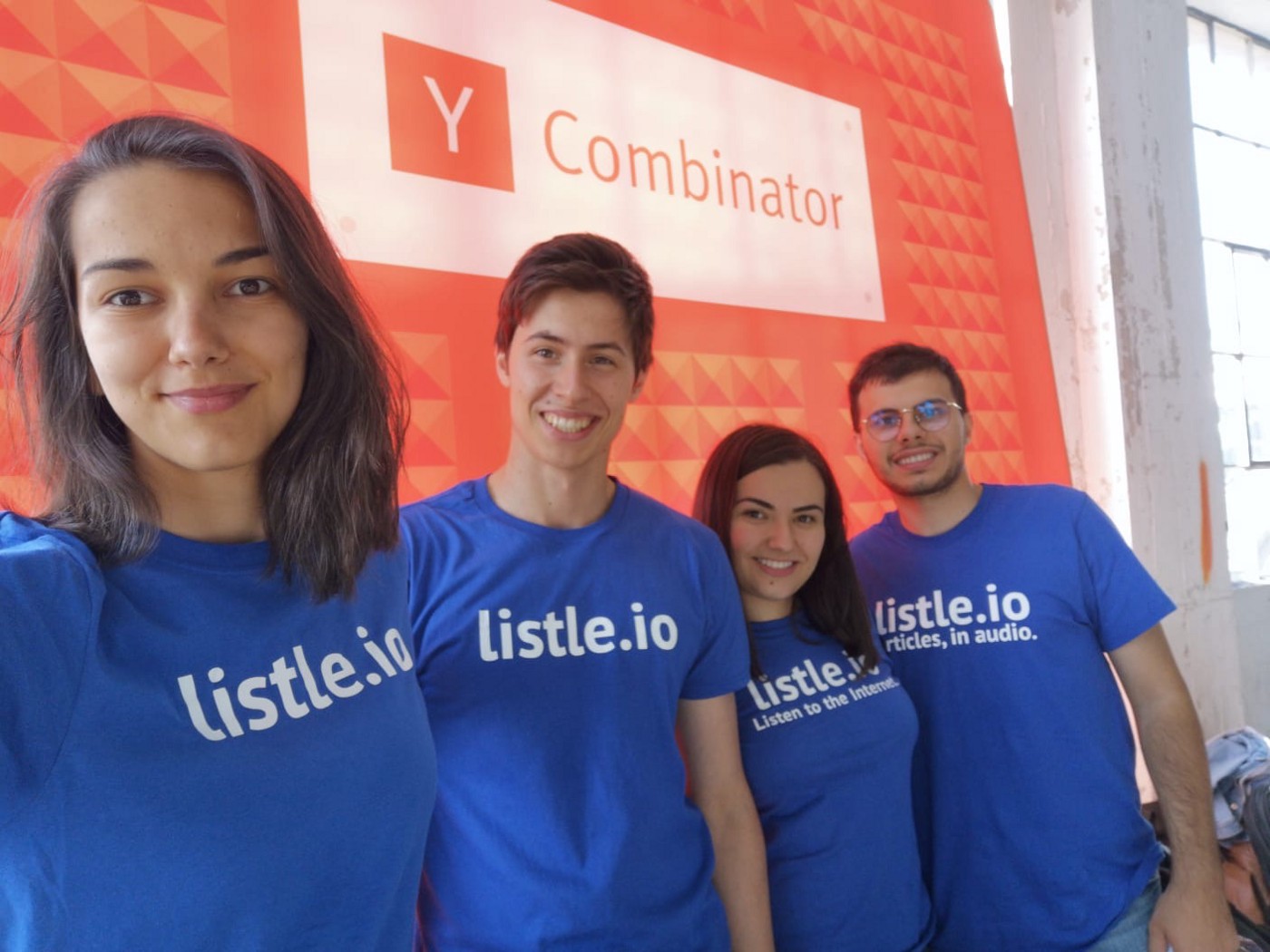 Could you give us a quick introduction to Listle?
Listle is an app where people can listen to the most interesting articles on the internet. There are a wide range of topics that we cover: news, science, technology, psychology etc. Everything is narrated by humans. It’s essentially other people reading aloud articles that you don’t have time to read. The problem we’ve been trying to solve is that a lot of people save articles to read later but they never actually get around to reading them. My three cofounders and I started Listle. We all went to school in London and we were commuting a lot. We noticed a lot of people listening to podcasts or trying to be productive during their commute, as its mostly dead time. We thought that this would be a good tool for people who want to be up to date with everything happening in the world, while doing something else.
We started Listle almost a year ago. We got funded by Y Combinator (YC) as part of the Summer 2019 batch and got some seed funding at the end of the program. We have mainly been focussing on improving the product. A year ago, when we started, we only had the idea. We just knew we wanted to do something in the audio space, that included audio articles. So, I’d say we are still early stage. I think we have now reached a stage where the product is good enough to justify focussing mainly on growth.

What was your career journey prior to starting Listle?
All four of us studied Computer Science. We were all interested in the space of tech startups. But it wasn’t until, I would say, late second year of University, that we became really good friends. We knew we all wanted to do something that involved startups after graduation, we knew that we didn’t want to get normal jobs.

How did you come across the idea?
We started with a few ideas, but they were mostly just side projects, because we were full-time students. But then, March of last year, one of my cofounders was talking about this problem. He’d had this problem for a while and would always mention how it would be great if he had someone to read out stories to him rather than saving them for later. The deadline for YC was approaching, and we thought – why not apply? We had known about YC for a long time. I used to read a lot of Paul Graham’s essays in high school and I’ve always found the whole industry to be very interesting. My cofounder was very excited about the idea and he got us excited about it. We kept talking about it and we just applied on the very last day of applications.

Were there any other ideas that you were considering when you were starting out?
The very first one, I believe, was to do with independent coffee shops. This was at the beginning of our third year at University. We used to go to a lot of coffee shops and we really enjoyed visiting independent coffee shops in London. There’s so many of them and we always wanted to discover new ones. We felt that not a lot of people knew about them, and that a lot of people were relying on chains like Starbucks, Costa, etc. So, we wanted to create a marketing platform for independent coffee shops. What that meant was: you’d discover a new coffee shop every day, you’d get a free coffee from them and they’d get publicity from it. We did get quite serious with this idea – I’d say more serious than some others- because we started talking to a lot of coffee shops. We spoke to them about if it would work, how it would work and if they would be interested. Somehow, we took a break from that because we had exams. We were a bit discouraged by some of the conversations we had with coffee-shop owners.


So, we moved on to a new idea which was an ethical fashion aggregator. We couldn’t find any place that listed all of these little shops that sell sustainable clothing. We tried to get some insight from little shops to see if there was interest. There was some interest; but again, I feel like maybe we just weren’t passionate enough about the idea.
The next thing we thought about was a tool for teams. We wanted to build something like StackOverflow, for teams to use internally. But then we realised that StackOverflow had just launched StackOverflow for teams so… that was that. The next thing we knew, it was already March and we pivoted to Listle.

What was it – after speaking to coffee-shop owners – that deterred you?
It was mainly their mindset. I feel like that happens a lot outside of the US. They were not as eager to have a digital presence or have more exposure. One of the owners we spoke to, he listened to us talk for about 20 minutes, about this idea. And then he brought out a huge booklet which listed all of the coffee shops in London and said “people are still going to use this. I don’t see the point of what you’re building”.

How did your previous experience prepare you for your current venture? In what ways were you unprepared?
We were attending University in the UK and all four of us are originally from Romania. The way the school system works in both countries is that you’re told what to do all the time. And if you do that, you’re successful. When we first got into YC, there were things we weren’t expecting. The fact that we had to ask for help, come up with the problems ourselves and seek out the right advisors. I feel like we adapted pretty quickly and it wasn’t such an issue.
Also, just the pace of everything. One of the bigger issues we had, in the beginning, was the fact that we hadn’t launched. Before the big interview for YC in Mountain View, we had a video interview with one of the YC partners and he said “Why haven’t you launched? You should be launched already”. We didn’t know how to respond because we weren’t accustomed to the idea that you have to launch and then get feedback. We thought the product wasn’t good enough to launch and we were too worried about people thinking our product was bad. I think that’s one of the biggest mistakes we made in the beginning.

After you had the idea what were the next steps?
The immediate next steps were building the bare minimum and sending it to some of our friends. We recorded some of the articles ourselves and saw if there was any demand.

Did the idea evolve as things progressed?
At the very beginning, we thought it would much easier to scale if we used text to speech software. We tried that for the first few weeks of YC. No one was listening and everyone was complaining that it was really crappy, that they could not listen to more than three minutes of it. It wasn’t engaging at all. We quickly realised that it needs to be humans that read these stories out loud.
Before, we were using people who had some experience in voice-acting, and who were willing to freelance. Most recently, we’ve introduced a creator’s platform where anyone can sign up and read stories.

What was your experience of Y Combinator? Any tips for readers on getting into a program like this?
It was an amazing experience. I actually wrote a blog post on medium about application tips and tricks(Listle's Journey through Y Combinator), because I know how much they helped me and the team. One of the most important things is to reach out to alumni. The alumni network is one of the biggest advantages of going through YC. We still talk to partners at YC, we still get in touch with other companies and they get in touch with us. So, I think reaching out to people who are in a similar space, or reaching out to alumni to get advice about the application, is a good idea. Do as many mock interviews as possible. We had around 13 to 15 mock interviews. One of the guys that helped us with the mock interviews is now an advisor and an investor in Listle. You need to be very concise when writing out the application. What else? … Launching! You might have the greatest idea in the world, but you need to speak to a few people to see if it is something people will actually use.

Do you have any advice for female founders specifically?
I think it’s the same advice really. Just to be very confident in what you’re building. And to not be afraid of speaking up. You aren’t going to get anywhere if you’re avoiding important or scary conversations. Obviously, try to do it in a nice manner, but if something doesn’t work, speak up.

Were there any low points that you can think of, along your journey so far? How did you get through them?
For us, the low points usually came when we had an idea that we thought would work, maybe like a growth hack or a new initiative, and we didn’t get the response we expected from users. I don’t think you need to dwell on that for too long. I think the best thing you can do is think about the next big thing. Especially with consumer products, the same thing won’t work twice. For instance, we would be posting on HackerNews or Reddit, that same thing, if we did the next week, might not work. Because people would say “Oh you already did this”.

Any funny or most memorable stories along the way?
I think one of the most memorable things is how we got into YC. We applied on the very last day of applications. We had our last exam on May 31st and we went to the exam hall with our luggage. We took the exam and five minutes later we were on our way to the airport. We were the very last ones to interview for YC. The interview process was already over, and it was the exact same day as the kick-off event. We did the interview, waited outside for five minutes, they told us we got in and they told us “you should go to the kick-off event right now- because it’s already started”.

If you could go back and give yourself one piece of advice, what would it be?
I think it would be to not rush some things, while trying to accelerate some other things. Something I’ve heard recently: “When you delay instant gratification, you will experience long-term satisfaction”. Yeah, you have to move fast and break things. But, at the same time, you have to be patient with everything you’re building. Just because something doesn’t work now, doesn’t mean you should give up.

What are your favourite books?
Fiction:
One of my favourite books is Gone with the Wind - Margaret Mitchell. I read it in high school and I’ve re-read it three times already.
Non-Fiction:
There’s so many. Some of the best ones:
A Short History of Nearly Everything - Bill Bryson
Man’s Search for Meaning - Victor Frankl