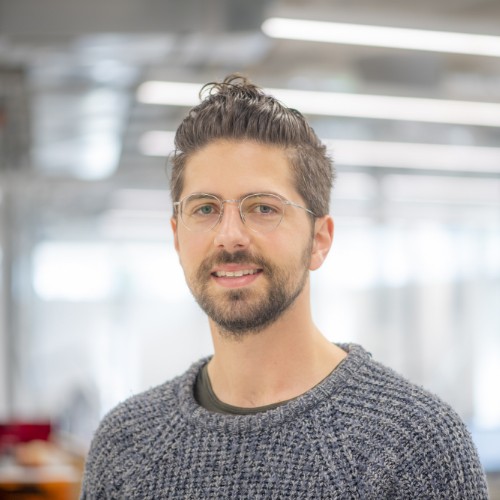 Could you give us a quick introduction to Holy Grail?
The concept has changed quite a lot since the start of Holy Grail. What we do right now is use probabilistic deep learning to accelerate research in all kinds of natural science and engineering-related fields. We have built a platform. Maybe you can compare it to googles AutoMail or Amazon’s Sagemaker. The idea is to bring data science or this kind of probabilistic deep learning to the masses. Anyone can use it. You don’t need a background in data science. You just plug in your dataset, and it chooses the model, chooses the architecture and gives you your results. It is targeted at people who do research. We work in areas such as plant-based meats, cultivated meats, and bio-fermentation.

What was your career journey prior to starting Holy Grail?
Initially, my University degree choice was influenced by my interest in sustainability and global warming. So, I decided to study Chemical and Environmental Engineering. During my undergraduate years, I worked at a startup as well as BP, the huge Oil and Gas company, and I enjoyed working at the startup so much more. I enjoyed the energy, the impact you have and how dynamic it is, as opposed to a big company where you’re a very tiny fish in a very big pond. I’ve always had entrepreneurial ambitions so that kind of confirmed that this is the direction I want to go in.
In my Master’s degree, I decided to specialise in nanotechnology. I decided to do a PhD because I wanted to have more domain knowledge in areas that I cared about. For me it wasn’t enough to just understand the business side, I wanted to understand the technical side of it. I wanted to specialise in an area which I considered relevant. But in the back of my mind, I always had the ambition to eventually become an entrepreneur. So, I chose an area which I considered to be very novel, and at the forefront of what’s happening, which is 3D printing. Specifically using metal Nano-particles for the printing of sensors, electronics, wearable technologies and all kinds of other novel electronics applications – it’s a very exciting field. Maybe it’s hard to see how it directly relates to sustainability but the use of sensors in all kinds of areas is part of that. I’ve always seen myself as a technical person and I felt more comfortable starting a company with this background, as opposed to starting one straight after a three-year bachelor’s degree.
During my PhD, I met a venture builder in London called Deep Science ventures. They have a really unique approach where you don’t need to have an idea. You’re just highly skilled and you have founder characteristics. They pay you to study certain areas and industries and to come up with ideas. That was an approach I liked because, at this point, I felt like I was quite highly technically trained and skilled, with my PhD, but I didn’t have “the idea”. I met my co-founders at Deep Science Ventures and we ended up starting Holy Grail together.

How did you come across the idea?
We were passionate about global warming and sustainability. It’s very clear that one of the main technologies which will enable us to maintain a similar living standard while moving to sustainable energy sources is better and more widely available energy storage. We identified that pretty early on. We spoke to all the experts in the field, from top Universities and top Companies. We looked at the way research is done in this area and looked at output. It was shocking to see that in this field of energy storage, where so much money is being invested, the improvements have been marginal. Lithium-ion was invented in the 70s by a professor who we met from Oxford University, John Goodenough, and since then we’ve seen improvements of maybe 10% per decade, of battery metrics like energy density. Basically, there hasn’t been any breakthrough. We came up with a theory that the main reason we are lacking a breakthrough is that there is no combined approach. Research tends to be very narrow, which to some extent is necessary to reach the level where you’re making progress, but this causes a problem in terms of practical application. For example, let’s say some battery research looks at one aspect of a battery, what tends to happen is when you put it into a larger system, this effect goes away.
We try to think of a way that research can be done very differently and enable breakthroughs. In this example, your research is always put into the entire battery. While you are working in detail on one compartmentalised aspect, you only ever study the final outcome of the battery, and you don’t go into too much detail on the compartmentalized advancement. We recognised that data modelling and machine learning is an area that is incredible for this, but it hasn’t really been applied yet. Part of the reason is that a lot of researchers and scientists these days don’t have the skills to do serious data science and don’t have the time to learn.
We realised that giving researchers who could benefit from machine learning the most the ability to apply a niche field of machine learning (probabilistic deep learning) to their research would enable incredible breakthroughs.

Were there any other ideas that you were considering when you were starting out?
We thought about other opportunities in the hardware space, around energy storage. For example, one of the things we thought about was around home energy storage, similar to what Tesla is doing with solar panels on the roof and a Powerwall which stores electricity.
I guess one of the reasons we chose our current idea is that hardware is inherently a more challenging business model. You have much higher overheads, development cycles tend to be much longer, it’s harder to put a recurring business model into place (as opposed to the one-off sale of a device).

How did your previous experience prepare you for your current venture? In what ways were you unprepared?
We went through Y Combinator. Getting that kind of exposure to people who had lots of experience in the world of startups was incredibly helpful, and something that I learned a lot from. I had very little knowledge on startups prior to YC. I learned about details like equity split, investor relations, how to raise, how much to raise. So many things that I think are really essential to starting a company.
As an example, one of the really important things I learned was this concept of the Lean Startup. Which is that you don’t build anything before you’ve sold it already. You come up with a demo or something, and actually just sell it.
The main shift that occurred when I moved into the startup world, was the move away from a solution focussed approach to a problem focussed approach. Most Universities operate completely solution focussed. In my PhD, I came up with a process which made it much cheaper to print a 3D part. Then, once you have a solution from the lab, you’re looking for a problem which fits this solution. Who is this useful for? This can work, but most of the time it doesn’t. Becoming an entrepreneur completely reshaped the way I see the world in terms of problems. Actually, you should always be starting with a problem as opposed to the solution.

After you had the idea what were the next steps?
We pitched it to Deep Science Ventures, the venture builder, who liked it and decided to give us some pre-seed investment. That was our first investment. We incorporated the company in London first and then went on to Y Combinator.

Did the idea evolve as things progressed?
Initially the aim was to use all kinds of software to produce a hardware product, a battery in this case. From that, because of various strategy decisions, we decide to just go down the software route, for reasons similar to the ones I mentioned before.

Were there any low points that you can think of, along your journey so far? How did you get through them?
There were a lot of low points. I can’t think of one specific point off the top of my head. How to overcome them? I would say the most healthy and best way is bouncing off your co-founders. You will have days where you feel low and you don’t see the point. Those hopefully will be the days when your co-founder is on a high and motivated, and you bounce off that energy, and vice versa. This is where having a co-founder is very powerful.

Any funny or most memorable stories along the way?
The classic Silicon Valley story (Bill Gates, Steve Jobs, etc.) is that you live in a house in Silicon Valley and you start building stuff in the garage. You can go by and visit the Steve Jobs’ one. We thought about getting a house with a garage, but we had to do chemical experiments and we couldn’t do them in a garage. So, we found a lab and we ended up living in the lab. We did the opposite of what most people do – they find a house and work in the house or the garage of the house. We were going to the gym next door to shower, because there was no shower in our lab.
If you could go back and give yourself one piece of advice, what would it be?
One thing is: pay a lot of attention to founder relationships. It needs to be a combination of friends that you work well together with. Which normally, you never really have. People like to separate the two. In this case, that doesn’t work. The significance of that just became clear to me, because of those low points.
The other thing would be always focussing on the problem and going back to the problem, as opposed to getting distracted by investors, press, conferences, whatever else. It’s this lean startup mode where you just focus on the problem, and keep iterating until you’ve found product-market fit. You should spend 90% of your time always on that, I think that’s the most important thing.

What are your favourite books?
I am a big fan of Malcolm Gladwell. I like the content and as well as the fact that he’s a good writer. My favourite book of his is Outliers, I think the insight you get from it is really valuable.
One completely different book, which is also one of my favourites is, Demian – Hesse. It’s a very poetic story about a young man growing up and coming of age.